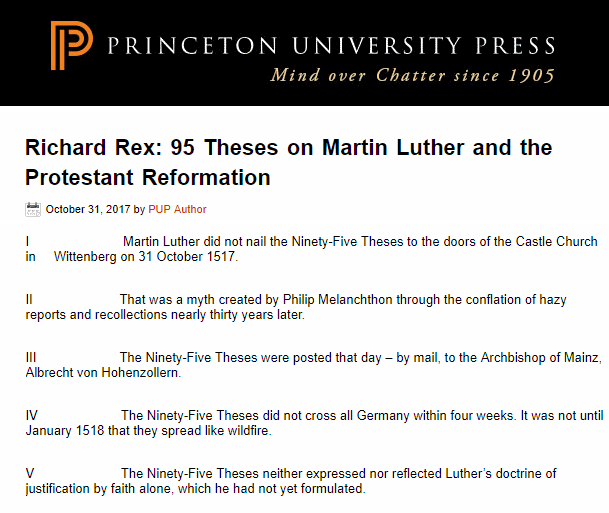 The 95 Theses of Richard Rex

I.      Martin Luther did not nail the Ninety-Five Theses to the doors of the Castle Church in Wittenberg on 31 October 1517.

II.     That was a myth created by Philip Melanchthon through the conflation of hazy reports and recollections nearly thirty years later.

III.    The Ninety-Five Theses were posted that day – by mail, to the Archbishop of Mainz, Albrecht von Hohenzollern.

IV.     The Ninety-Five Theses did not cross all Germany within four weeks. It was not until January 1518 that they spread like wildfire.

V.      The Ninety-Five Theses neither expressed nor reflected Luther’s doctrine of justification by faith alone, which he had not yet formulated.

VI.      The key to justification by faith alone was the sense of certainty of divine grace which it conferred upon believers.

VII.    Such certainty is not only absent from the Ninety-Five Theses, but is explicitly denied in Luther’s covering letter to the archbishop.

VIII.   Luther’s doctrine of justification by faith alone is a simple doctrine which many people, even some Protestants, find hard to understand.

IX.     Luther’s doctrine of justification by faith alone was unthinkable without the prior development of the theology of indulgences.

X.      Justification by faith alone represented not so much the abolition of indulgences as their ultimate extension and elaboration.

XI.     Indulgences were not selling salvation or forgiveness. They were remittances of punishment in reward for charitable acts or gifts.

XII.    It was not the unpopularity of indulgences that drove Luther to protest in 1517, but their popularity.

XIII.   Luther did not proclaim what many had long thought but never dared to say. He said what had never before been thought.

XIV.    The Protestant Reformers came not from the margins of the late medieval church, but from its intellectual and moral elite.

XV.     Although there were many Protestant Reformers, Luther was neither one among many nor even first among equals.

XVI.    Luther was the one: they were the many. No Luther, no Reformation.

XVII.   The personality cult of Martin Luther in his lifetime saw the structure of a saint’s cult applied to a living person.

XVIII. No other Protestant Reformer was the object of such a cult in their lifetime.

XIX.    Luther alone of the Protestant Reformers saw the impossibility of reconciling justification by faith alone with the Epistle of James.

XX.     All the early Protestant Reformers took their lead from Luther and found their inspiration in him.

XXI.   Ulrich Zwingli alone claimed that his path to Reformation was entirely independent of Luther’s.

XXIII.  Zwingli made this claim only after he had fallen out with Luther. It was not true.

XXIV.   Andreas Carlstadt was unwilling to play second fiddle to Luther, but was unable to snatch the lead from him.

XXV.    Philip Melanchthon was a derivative thinker who always bore the impression of the last person to sit upon him – usually Luther.

XXVI.   Martin Bucer was one of the most original Protestant Reformers, but lacked the charisma to win a significant following for himself.

XXVII.  John Calvin’s most distinctive religious ideas were derived entirely from others, most notably from Martin Bucer.

XXVIII. John Knox was a prophet of the Old Testament disguised as an apostle of the New.

XXIX.   Ulrich von Hutten adopted Luther’s cause solely for the impetus it might give to the concept of the German Nation.

XXXI.   The idea that Luther himself was only following the teaching of Augustine of Hippo is a radical misunderstanding of both men.

XXXII.  For Luther, Augustine only ever said two things of real value – and he invariably misquoted one of them.

XXXIII. Luther’s doctrine of original sin was not Augustine’s, but one that Augustine repudiated when it was imputed to him by his opponents.

XXXIV.  Luther’s misreading of Augustine on original sin was rich in consequences for his theology.

XXXVI. Renaissance humanism was not in any significant sense a ’cause’ of the Protestant Reformation.

XXXVIII. By the time Erasmus saw Luther as a threat to the unity of Christendom, it was too late for his weight to turn the scales.

XLI.  Luther’s theology was formulated not in the language of Renaissance humanist scholarship but in that of the Vulgate Latin Bible.

XLII. Luther’s theology depended not on the Greek or Hebrew scriptures, but on the Vulgate Bible and on the Latin theological tradition.

XLIII. Luther’s appeal to the Bible alone was plausible and popular, but was soon shown by events to be fatally flawed.

XLIV. This ‘scripture principle’ resulted in so many rival versions of Christianity that it showed itself to be no practical use at all.

XLV.  Luther never fully thought through the Biblical tag he loved to quote against his opponents: ‘all men are liars’.

XLVI. For Luther, the plain sense of scripture meant taking Christ literally when he said, ‘This is my body’.

XLVII. For Zwingli, the plain sense of scripture meant not taking Christ literally when he said, ‘This is my body’.

XLVIII. Luther thought Zwingli a Nestorian. Zwingli thought Luther a Eutychian. Each knew the Bible was on his side.

XLIX. Neither Luther nor any other Reformer advocated the right of the individual to make up their own minds about what the Bible taught.

L.    ‘Anticlericalism’ was not a ’cause’ of the Reformation, though criticism of and violence against the clergy played their part.

LI.   Anticlericalism was not a growing problem that was bound to culminate in catastrophe for the late medieval Church.

LII.  If the friars had been widely resented and hated around 1500, Luther would hardly have joined an order of friars.

LIII. Criticism of priests in the later Middle Ages was nowhere near as pervasive and corrosive as that of politicians in our own times.

LVI.  The printing press was neither intrinsically nor necessarily more favourable to Protestantism than to Catholicism.

LVII. The printing press might be considered the creation of the late medieval Church. The earliest printed item may have been an indulgence.

LVIII. The classic printed text of the Reformation was not the popular pamphlet but the official catechism.

LIX.  The idea that preaching was in decline on the eve of the Reformation is a comical misapprehension.

LX.   The rapidly growing provision for preaching in the late medieval Church was a springboard for the Reformation.

LXII. Luther’s was not the first German translation of the Bible, though it was the most widely read and the most influential.

LXIII. It is a misleading simplification to suggest that Luther invented congregational singing.

LXIV. Lay participation in church music was an increasing feature of late medieval Christianity: Luther himself had been a choirboy.

LXV.  Far from being in terminal decline, late medieval Christianity was flourishing as never before.

LXVI. The devotion of late medieval Christians to the upkeep and embellishment of their parish churches is one of the wonders of history.

LXVII. The Reformation was, from one perspective, the excommunication of the dead.

LXVIII. The elimination of the cult of the saints is one of the most striking achievements of the Protestant Reformation.

LXIX. There is a deep affinity between the rejection of images from churches and the denial of the real presence of Jesus in the eucharist.

LXXI. Yet Protestant beliefs and practices were no better suited to life in early modern cities than were those of Catholicism.

LXXII. The Reformation can to some extent be viewed as a rebellion of the rich against the poor.

LXXIII. Yet far from favouring capitalism, the early Reformers were even more firmly opposed to ‘usury’ than were their Catholic opponents.

LXXIV. The connection between Protestantism and the rise of capitalism was essentially fortuitous. There were plenty of Catholic capitalists.

LXXV. The connection between the Reformation and the enrichment of specific individuals was direct and unmistakable.

LXXVI. Luther was appalled when German peasants inferred from his doctrine of ‘Christian Liberty’ that Christians ought to be free.

LXXVII. It was the decisions of a generation of princes of the Holy Roman Empire that determined the fate of the Protestant Reformation.

LXXVIII. Princes were as likely as anyone else to be caught up in the fervid popular enthusiasm for Luther and his teachings.

LXXIX. Nowhere did the Catholic Mass cease to be celebrated until and unless it was forbidden by public law.

LXXX. Nowhere did Protestantism, once introduced, disappear except as a result of strenuous persecution.

LXXXI. The offer of the eucharistic chalice to the laity was one of the most potent and appealing symbols of the Protestant Reformation.

LXXXII. In almost all its forms, precisely because of its biblical focus, Protestantism did not weaken, but strengthened, patriarchal ties.

LXXXIII. Protestant polemic against Catholicism routinely deployed the stereotypes of misogyny along with accusations of effeminacy.

LXXXIV. The beards sported by so many Protestant Reformers consciously embodied and eloquently expressed their patriarchal proclivities.

LXXXVI. Luther did not think Roman Catholicism gave people a false sense of security: he felt it gave them no security at all.

LXXXVII. Luther remained a loyal Catholic until he could no longer believe that the religion of the Pope was the true Catholic faith.

LXXXVIII. The one thing on which almost all Protestants agreed during the Reformation was that the Pope was Antichrist.

LXXXIX. Luther invented the concept of the ‘invisible church’.

XC.   Luther’s belief in the existence and activity of Satan was almost as lively and compelling as his belief in Christ.

XCI.  Protestants and Catholics alike accused each of ‘judaizing’, deploying against each other the stereotypes of antisemitism.

XCII. The ferocity of Luther’s antisemitism was extreme but not unique.

XCIV. Luther’s virulence in all controversy shocked not only his opponents but even his friends and followers.

XCV.  In 1500, western Christendom was a seamless robe. By 1600, it was a patchwork quilt. That was the Reformation.

Dr Richard Rex is Professor of Reformation History at the University of Cambridge and author of  The Making of Martin Luther. These theses were originally posted on the Princeton University Press website in 2017.